Some of you may know that I travel all over the country to visit haunted historical locations.  I am very blessed to have a partner that never hesitates to drive the “road less traveled”.  We have ended up in some pretty amazing places and have experienced many adventures together.

This story is about one of these adventures. This past fall we headed toward Yellowstone National Park.  I visited the Rockford Public Library and checked out several tour guides for the park and surrounding areas.

I am always astonished to find ghost stories in the most unusual places.  One of the books mentioned that there are several grave sites in the park beyond the cemeteries of Fort Yellowstone and Kite Hill.  One of the graves that caught my attention was the story of Mattie Shipley Culver who died in March of 1889. 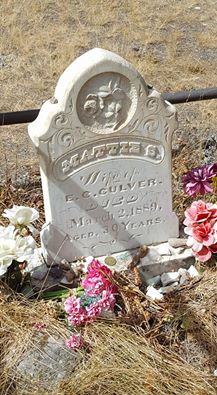 Her grave was not inside one of the cemeteries but stood all alone close to the Nez Perce Picnic Area inside of the park itself.  At first I was curious about why a woman would be buried there all alone with no other family members close by.  I became fascinated with Mattie and felt compelled to learn her story.

She was born Martha Jane Shipley on September 18, 1856 in Massachusetts.  Her family was very poor and Mattie (as her family called her) started to work in the dirty textile factories as a young child.  Her parents divorced when she was seven causing even more hardship for the little girl. Mattie lived with her father after the break up of the marriage.  When he was killed during the Civil War, Mattie was passed around to several family members.

Mattie grew to be a lovely young woman with very limited resources.  She and her sister, Nellie would spend hours dreaming of far-off places away from the crowded city. Their dreams became possible when Nellie met a young man named David Alston.  David made the sisters feel like they could have the life they had visioned.  The three decided to leave the crowded cities of the east coast behind and headed toward the west.  They settled in Pease Bottom, Montana.

It was in Montana that Mattie first fell in love.  The man’s name was Eugene Gillette.  Mattie’s happiness was short lived, however.  She must have been heart broken when Eugene contracted tuberculosis and died one year after their wedding. Mattie’s devotion and care for her young husband impressed all who knew her.

Mattie next met a dashing young man by the name of Ellery C. Culver.  Ellery was an adventurer that had left his home state of New York and traveled west.  He served in the Civil War in the Ohio Infantry. Though the details of their meeting have been lost to time, stories tell of how the widowed Ellery was taken with the beautiful twenty six year old Mattie. Records show that the couple was married in Yellowstone, Montana in 1886.

The young couple welcomed their first child in June of 1887.  They named the little girl Theda after Ellery’s sister.  The couple must have thought all of their dreams were coming true when Ellery was offered a job through the Yellowstone Park Association as the Master of Transportation.  He had to leave Mattie and the newborn behind until he could make things ready for them in their new home.

Ellery established their new living quarters at the Firehole Hotel, set in a beautiful location on the Firehole River.  Mattie was filled with excitement when she left Billings on July 26, 1886.  She was moving to a beautiful location with her husband and her daughter to begin their new life together.  Mattie thoughts probably wandered back to the nights spent with her sister when they talked of their future lives far away from the dirty factories of the city.

Both Ellery and Mattie must have felt blessed as they settled into their new surroundings. Mattie helped Ellery with his duties at the hotel and they shared many happy days watching their little girl playing among the pine trees.

Mattie probably knew from the beginning that she had tuberculosis.  She had nursed her first husband through the dreaded disease and knew the symptoms all too well. She might have even known before the trip to Yellowstone and hoped the clean mountain air would save her.

Mattie would put on a brave face for her husband but she began to spend more and more time walking along the banks of the Firehole River.  All too soon, the disease progressed until Mattie could not hide the symptoms any longer.  The couple had to face their worst fears and on a cold winter day in the beginning of March, 1889, Mattie drew her last breath.  Ellery was grief stricken and unsure what to do with himself.  There also was the matter of Mattie’s body.  The deep snow and frozen ground meant that burial would need to be postponed.

Mattie was well loved through the area and several soldiers came to assist her family.  They brought along two barrels to place end to end.  They gently placed Mattie’s body inside and covered her with snow.  Mattie’s official burial was not conducted for almost two weeks later.

Ellery knew that Mattie loved the area around the river and he made the decision that she would rest there under the pines.  He built her a coffin from wood that was once a partition from their rooms. Ellery had a beautiful head stone designed and shipped to place on her grave so that all who wandered past the place would know of Mattie and his love for her.  Ellery was due to leave the area in the spring but he made the soldiers and others inside the park promise to look after Mattie’s grave until his return.  He took Theda to Mattie’s sister’s home while he traveled from station to station for his duties.  Ellery often returned to the lovely area to visit Mattie’s grave.  He would work three more years in Yellowstone before moving away.

Even after the rest of the family left Yellowstone, people continued to see Mattie.  She often was seen walking by the river she loved.  Some even heard her lovely voice singing lullabies as they walked among the pine trees. Those who drew close to see her face spoke of her beauty and the incredible sadness that filled her eyes.

Unfortunately, Mattie’s death would not be the only tragedy in Ellery’s life.  In 1906, nineteen year old Theda lived with her Aunt Nellie in Spokane, Washington.  She became ill and died suddenly.  Ellery seemed broken by this final loss and retired to a Old Soldiers home in California. 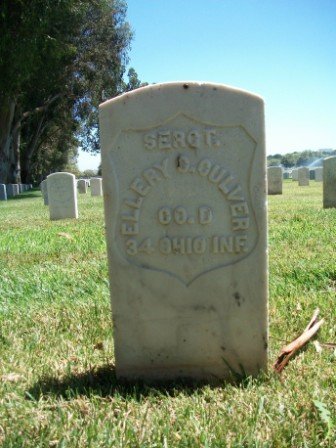 Finally, in 1922, Ellery knew his time was drawing short and he spoke to all who would listen that his final wish was to be laid to rest next to his beloved wife.  This wish was denied and after his death on April 7, 1922, Ellery was buried in the National Soldiers Home Cemetery in what is now Los Angeles, California.

Though his body may lie many miles from Mattie, some say that Ellery’s spirit has joined hers in Yellowstone.  Travelers in the area now speak of not one spirit but two.  Witnesses tell of spotting two people dressed in older period clothing walking hand in hand by the beautiful river, especially in the evening hours right before sunset.

As I walked where Mattie and her family once lived so long ago, I was once again touched by her story. I noticed the untouched beauty of the spot and also realized that this location, like so many I have been fortunate enough to visit through the years,  holds its place in time.  The veil between the present and the past is very thin here and it is possible to envision the way things once were.

For more details of the fascinating life of Mattie Culver, see the book “Mattie, A Woman’s Journey West” by Nan Weber, https://nanweber.com/my-book-page

If you would like to read more about the people who settled Yellowstone (and their ghosts!) I would recommend the following two books.  “Death In Yellowstone” by Lee H. Whittlesey describes some of the mishaps, accidents and other means of demise that have befallen visitors and staff throughout the years and “Yellowstone Ghost Stories” by Shellie Larios tells of the spiritual inhabitants as well as some of the legends that have been passed down.